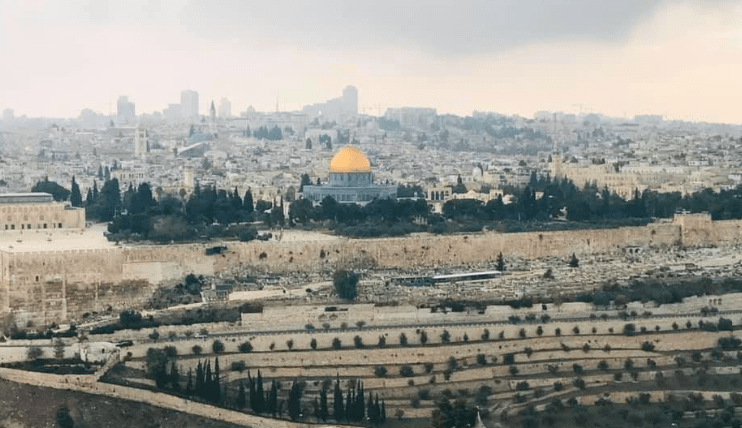 Recently, Amy went to Israel with others from New Life and we thought it’d be fun to share some of her thoughts. Her adventures will be recounted in a series of days as she did such a great job capturing what she experienced that we didn’t want to edit anything out. As your read her experiences we would love for people to consider going on a future trip. In fact, we’re currently considering a trip next May if we can work out the logistics and if there is enough interest. If you want to go click here to let us know. You can read Part 1 here or Part 2 here. 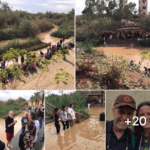 Day 6 is big, guys, and it’s taking me a long time to get it together because my sister, Jen is keeping me VERY updated on the OSU Michigan game right now. GO BLUE!

Okay, so today started out with a long drive from Tiberius south where we stopped at a site along the Jordan River (Kaser El Yehud) set up specifically for baptism. There were 5 people in our group who wanted to get baptized and what better place than in the same river John the Baptist baptized Jesus! (Matthew 16:13-17)

After drying off, we entered Palestine to visit Jericho! The excavation of Jericho shows a portion of a wall dating to 8,000 BCE and a tower, 10,000 BCE. Jericho is the oldest city on earth! While still in Jericho, we stopped at this wonderful glass shop and met the nicest friendliest group of people and spent a lot of time there just talking. (Apparently my eyes look like the sky, so the young man in the picture with me had to give me a cross charm made of blue stone from the Holy land, and I will never live that down if Joe, Joel, Tess and Todd have anything to do with it!)

Next, a surprise stop included a view of a winter palace built by Herod the Great. This is the same palace where Herod died a miserable awful slow death. (Matthew 2:19-20) it was so neat to be able to touch one of the walls! we are going to visit Herodian this week which is where Herod was buried.

We then continued south to the top of the Dead Sea in Qumran. This is probably the coolest stop of the day for me. Here the Dead Sea Scrolls were found in the caves above and along the length of the Dead Sea. (400 caves had evidence of past life in them, and 11 had scrolls or scroll fragments). The site excavated here was the home of the Essenes, a Jewish sect that existed in Palestine during the time of Christ and were dedicated to studying the scriptures. It has a room that was used for writing (or scribes). It is believed to be the very place a lot or most of the Dead Sea scrolls were originally written. And we stood inside it. The discovery of the Dead Sea Scrolls demonstrates the incredible accuracy of transmission over a thousand year period, making it reasonable to say that the current Old Testament texts are reliable copies of the original works.

The daylight was quickly becoming twilight as we drove from Qumran to Jerusalem with a stop at the Mount of Olives. The MoO is frequently mentioned in the Old and New Testament and overlooks the Temple Mount inside the Old City. As a group we had a communion service here which was really amazing. As we were leaving, we encountered our second camel of the day. Friendly little beast.

Well, as I wrote this post, Michigan decided to give up and lose yet again, so I’m gonna take my dejected self to bed.