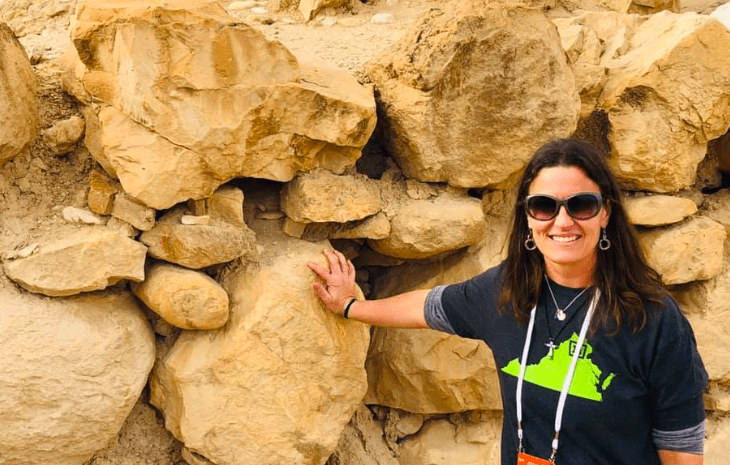 Recently, Amy went to Israel with others from New Life and we thought it’d be fun to share some of her thoughts. Her adventures will be recounted in a series of days as she did such a great job capturing what she experienced that we didn’t want to edit anything out. As your read her experiences we would love for people to consider going on a future trip. In fact, we’re currently considering a trip next May if we can work out the logistics and if there is enough interest. If you want to go click here to let us know. You can read Part 1 here, Part 2 here and Part 3 here. 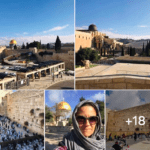 Happy Sabbath!
Day 7 started out with a visit to the Temple Mount. You all know that the Temple Mount is holy to Jews, Christians and Muslims, but the current TM is controlled by the Muslims as the Dome of the Rock sits on the site of original Jewish Temples, one built by Solomon (2 Chronicles 3:1), and after the Babylonians destroyed it, a second built by Zerubbabel (Ezra 3:7-13) So both the women and men in our group dressed very modestly and the women covered our heads out of respect. There are no Bibles or Christian jewelry or anything remotely Christian allowed up on the Temple Mount area so we brought none of that with us so it wouldn’t be confiscated. The TM holds the Dome of the Rock as well as the El-Aksa Mosque (Masjid El-Aksa means “the furthermost sanctuary, or the furthest Muhammad got in his dream). The Dome of the Rock is a mosque built over a large flat rock that was probably the threshing floor of Araunah, on which David built an altar and offered sacrifice. (2 Samuel 24).

Then we swung down to the Western Wall, built by none other than our friend King Herod in 20 BCE. where we were able to go up and observe the prayers going on, touch the wall and even put a prayer in the wall if we wanted to.

As we continued walking all over the Old City , we came upon the original ancient Roman Cardo, built in the Byzantine period, in the 6th century AD, it was the Main Street that ran from the Damascus Gate to the Zion Gate. A Cardo was lined with columns and shops in between them. It was a very busy place.

Then we went to the archaeological park outside the walls of the Temple Mount where many excavations have been made. The BEST thing there was a stone step made of bedrock (which is how they determined it was original) which used to lead up into Solomon’s temple and where Jesus spent a lot of his time teaching and going and coming from the temple. That’s right, Jesus stood on that stone, and so did I.

Then we walked outside the Dung Gate and over a short distance to the excavation of the City of David. Here, we got to see a stepped stone structure that some believe could have been the support for David’s palace walls, while others think it was part of the foundation of Canaanite “Jebusite” stronghold of Zion. Within the City of David lies a Canaanite water tunnel which we were able to walk through, that allowed protected access for the women fetching water to the fortified pool that held the water coming from the Gihon Spring outside the city. Later, David’s soldiers probably used this tunnel to sneak into the city and capture the Jebusites.

We also saw Hezekiah’s Tunnel, which he built as the threat of Assyrian invasion grew imminent, to bring water from the Gihon Spring farther west into the city. This action diverted the water from anywhere accessible to the approaching Assyrians and guaranteed a safe water supply during any siege. King Hezekiah’s story is actually pretty cool and he was not only favored by God, but also just plain brilliant. (2 Kings, Ch. 18-20)

We ended our day at the Pool of Siloam. You all know this story! Jesus has just slipped away from the Temple because the Jews wanted to stone him since he had just claimed to know/have seen Abraham. As he went along (on the Sabbath, mind you) he saw a blind man. He spit in the dirt, made mud and put it on the man’s eyes, and told him to go wash in the Pool of Siloam. The man did, and he could see! The Pharisees were not happy that Jesus has healed on the Sabbath either! (John 9:1-34)

I’m so overwhelmed by everything that we see each day that writing this helps me process it all. I’m glad some of you are enjoying it!

See you tomorrow when we tackle the Via Dolorosa, the Church of the Holy Sepulchre and Mount Zion.