Recently, Amy went to Israel with others from New Life and we thought it’d be fun to share some of her thoughts. Her adventures will be recounted in a series of days as she did such a great job capturing what she experienced that we didn’t want to edit anything out. As your read her experiences we would love for people to consider going on a future trip. In fact, we’re currently considering a trip next May if we can work out the logistics and if there is enough interest. If you want to go click here to let us know. You can read Part 1 here, Part 2 here, Part 3 here and Part 4 here. 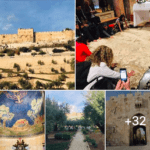 Day 8 – The Garden of Gethsemane, Old Jerusalem, The Via Dolorosa and Herod’s Palace.

We saw SO much more than I’m going to post about because I had to pair down in order to give you guys more photos inside the Church of the Holy Sepulchre. It is WORTH it… that church is so beautiful inside I’m almost considering getting up and going down there at 5:30 am to see it without the crowds. Almost.

Okay, starting from the beginning… this morning we went first to the Garden of Gethsemane. “Gethsemane” is a Greek word for “olive press.” The Church of All Nations stands on the site where it is thought that Jesus used the rock here for his prayer of agony. (Father take this cup from me…) (Matthew 26:36-56). Yes, I touched the rock, but the more powerful spot for me was the olive trees, the root systems of which could go back two thousand years, since it’s nearly impossible to kill an olive tree! I could imagine Jesus right there amongst those trees, watching the Eastern Gate as torches from the Roman soldiers came toward him on the night he was betrayed.

I mentioned the Eastern Gate… fun fact, the Eastern Gate of Jesus’s time was discovered not too long ago directly underneath the one you see in the photos, and the current one, was sealed by the Ottoman Sultan, Sulaiman the Magnificent in 1541 because in Jewish tradition, this is the gate through which the Messiah will come. It is suggested he sealed off the Eastern Gate, also called the Golden Gate, to prevent a false Messiah or “Antichrist” coming through entrance. The Ottomans also built a Muslim cemetery in front of the gate, to prevent a false precursor to the Anointed One, Elijah, from passing through the gate. There is a Christian cemetery directly below that.

We then climbed up the hill to the Lion’s Gate (also called St. Stephen’s Gate and Sheep Gate) which leads to the start of the Via Dolorosa, or “Way of Suffering.” First we stopped at the Pool of Bethesda and the church of St. Anne, the mother of Mary. The pool of Bethesda is where Jesus healed a man who could not walk. (John 5:1-15). It was really cool to know for sure that Jesus was actually here… healing people.

Next we really got started with the first two stations of the cross. Some of the 14 stations are historically and archaeologically accurate, and some are connected to a memory (such as Jesus stumbling). The locations of some of the stations have changed several times, but there are a few that are pretty sound. We started with the church of the Condemnation and the Church of the Flagellation where Jesus was condemned (Matthew 27:1-2) and beaten (John 19:1-16) and given his crown of thorns. The site of these churches is actually across the street from where these things actually happened because the Praetorium, or Roman Garrison where Pontius Pilate was, is now a Muslim boys school.

Just off from here is an odd little chapel with an arch for an apse. This arch is one of 3 arches that extends out of the church, across the street and then into somebody’s house probably! It is Hadrian’s Triumphal Arch, the “Ecce Homo” arch, built in 135 CE and traditionally marks the place where Pilate presented Jesus with the words: “Ecce Homo” or “Behold the Man!”

We walked the entire Via Dolorosa…. and if it weren’t JUST like Mardi Gras, I would have been able to appreciate it more. But it’s like the running of the bulls but with hoards of people and tiny narrow streets. It’s crazy.

At the end of the Via, is the best and most amazing part. The Church of the Holy Sepulchre. I want to start out by saying that there are 6 ancient Christian denominations that have governance over this place, and they CANNOT get along. So much so that they could not agree on who should hold the key to the front door. So guess who has it and who comes to unlock it every morning? Two Muslim families who have carried this responsibility for 800 years. Omg. I have no words.

Outside the city walls In Jesus’s time, the Holy Sepulchre has a sordid history of destruction and rebuilding but the current version we get to view was rebuilt in 1012-1170 CE. (The first was built in 326 CE) The site marks the spot where Jesus was crucified and buried and is the holiest spot in Christendom. Archaeologists have uncovered evidence that supports the theory that this is the location, and the limestone underneath was definitely used for executions and burials because it was not good for anything else! The photos below will have more info!

Our final stop of the day was Herod’s palace and The Tower of David. In Luke 23:6-12, Jesus is brought in front of Herod Antipas and says nothing as Herod grills him for information. That was probably right here in this palace-fortress. Herod erected three huge towers, as an additional protection and last refuge in case of danger. These he called after people close to him – Hippicus after a friend, Phasael after his brother, and Mariamne after his favourite wife, the lower half of Hippicus being the only part that remains. During the Byzantine period, the tower was renamed – the Tower of David – after the Byzantines, mistakenly identifying the hill as Mount Zion, presumed it to be David’s palace. (Nope! It’s not….)

I am really grateful that our guide, Mark, is an Archaeologist and has worked on excavation sites (including the one at Tel Dan). He gives us a very accurate assessment of the history, the proof and the memory attachment which legitimizes so much of this trip for me. I’m truly loving every minute of it!