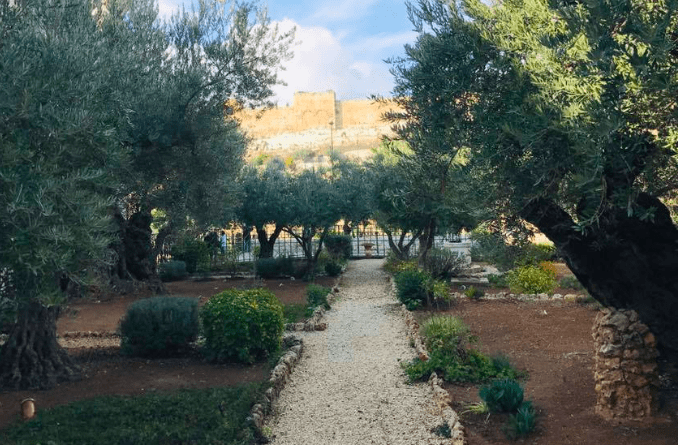 Today is the last part of Amy’s Israel with others from New Life. Her adventures will be recounted in a series of days as she did such a great job capturing what she experienced that we didn’t want to edit anything out. As your read her experiences we would love for people to consider going on a future trip. In fact, we’re currently considering a trip next May if we can work out the logistics and if there is enough interest. If you want to go click here to let us know. You can read Part 1 here, Part 2 here, Part 3 here, Part 4 here and Part 5 here. 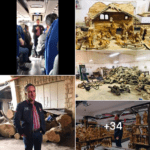 “As for you, Bethlehem of Ephrathah, though you are the least significant of Judea’s forces, one who is to be a ruler in Israel on my behalf will come out from you. His origin is from remote times, from ancient days.” (Micah 5:2)

Day 9 was a pretty special day with the Christmas holidays approaching, it got me with all the feels. We hopped on the bus and headed back into Palestine to Bethlehem.

In Bethlehem there is the Church of the Nativity with the cave of Mary and Joseph located under the apse. Archaeologically speaking, the cave (yes cave, not a wooden structure depicted in all the pictures) where Mary had baby Jesus and where the manger sat are very accurate. People used to use caves in this region for their animals and for lots of other reasons. The site was marked almost immediately after his birth because it was such a big deal, and was kept marked until Constantine’s Mother, Helena came and built a church here in 339 CE.

Also in the Church of the Nativity is the cave where the Angel appeared to Joseph while he was sleeping and told him to get himself and Mary and Baby Jesus out of Bethlehem because Herod was coming. (Matthew 2:19-20) Joseph wouldn’t have slept in the same cave as Mary and the baby. Also in the same cave system, is the cave of St. Jerome who translated the Bible into Latin while living there in Bethlehem. They say he also died in the cave, but this part of the story has little historical foundation.

We also drove over to the shepherd’s field (not far away) where the general area is known to have been where the angels appeared to the shepherds. The cave in the photos below is not necessarily their cave, but it is very representative of the type of place they would have been when the angels appeared. Notice the black ceilings from lots of fires.

How do we know when Jesus was born? Herod died in 4 CE so we know that Jesus was born some time shortly before Herod died, because hello, Herod tried to kill Jesus by ordering all Jewish boys 2 and younger in Bethlehem to be killed. (Matthew 2:16) It could have been even up to 9 or 10 years BCE when Jesus was born based on how long it took them to take a census back then. Mind. Blown.

Inside the Shepherds church our group sang Angels We Have Heard on High, and inside the Shepherds cave, we sang Oh Little Town of Bethlehem, and Hark the Herald Angels Sing, and I’m not gonna lie, this girl got choked up and could barely get the words out. I’ll never sing those songs the same way again. It was awesome to be able to actually picture what they are singing about… to see it with my own eyes.

Fun fact, adjacent to Bethlehem is Bayt Jala where there’s a cave and a church built over the cave that we could see while driving out of Bethlehem. Guess who lived in that cave? St. Nicholas. Yep! Santa and Jesus, hanging out together if not in reality, possibly in spirit. Ha!

Then it was off to Herodian. I have been so excited about this spot all week because it’s a tangible example of mountains literally being moved. (Matthew 2:19-20) When we got there I wondered why Herod chose this spot for his tomb. Herod’s mother’s chariot overturned when they fled Jerusalem during one of the many conflicts in his time on that spot. I believe she lived, but it stayed with Herod and that is why he chose it. Discovered and excavated by Israeli architect Ehud Netzer in 2007, Netzer fell to his death here while standing above the theater during the dig. He leaned against a board on a scaffold that was not secured. He spent his whole life looking for Herod’s tomb and died just a few feet from it right after the discovery. (At one point during his excavation, Netzer came within inches of the tomb of Herod before he turned around and started digging elsewhere. Can you believe it!?)

Sorry I love the stories about Herod….. such a crazy creep of a dude. Herod received this land and power from Rome because of his military savvy as a young man in pushing back the Iranians. His kingdom became the Eastern front between the Iranians and Rome. Herod was Rome’s “trip wire”. The Iranians were a threat that had Magi who held all the political power. Magi are king makers and king breakers. That’s why when they came to Herod and asked where is the king of the Jews that was just born, Herod was disturbed! (Matthew 2:1-3) 600 years after Jesus, the Iranians/Persians took the entire land again. They got to Bethlehem and saw the men making the mosaic of the Magi bringing gifts to Jesus, they spared the Church of the Nativity (because they were like, “Hey! That’s us!”) This is why The Church of the Nativity is the longest standing Christian Church in the entire Holy Land.

Today was a perfect entryway into the Christmas season and I’m a really grateful and blessed to have been able to see these places with my own eyes.

Oh… and also, I got my first (and last) tattoo. 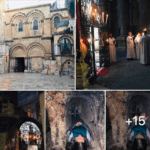 Day 10
Today was our last day in Israel. I can’t believe it is over already. I hope you all have enjoyed the journey!

About 6 of us decided we just HAD to get up early and go back to the Church of the Holy Sepulchre when it was quieter and more peaceful. We had hoped to be able to get in to see the tomb of Jesus since we didn’t get to see it the other day, but lo and behold, at 6 am, being held was a Catholic Mass on one side of the tomb and a Greek Orthodox Mass on the other side of the Tomb. In the same room. Feet from each other. It went on for so long, and they were trying to out sing each other, so much so that we had to get going.

The highlight of the day was a few hours at the Israel museum. I could not WAIT to lay eyes on the Dead Sea Scrolls. They did not disappoint. We were not allowed to take any photos in that area… boo.

Then we stopped at a place called Saint Peter in Gallicantu (or St. Peter at the Cock’s Crow). It is a GORGEOUS French Catholic Church dedicated to the narrative of Jesus’s trial before the High Priest Caiaphas and Peter’s denial of him outside. (Mark 14:53-65) There are conflicting reasons for and against the location of Caiaphas’s house, but archaeologists believe it made more sense for a rich high priest to be located in the “wealthy” section of the city where high priestly family homes have been uncovered, and not so far outside the city. Either way, it was a great view of the Temple Mount and the 3 valleys that meet at the south edge of the Old City, and a great place to end our trip.

Thank you all for being with me while I visit this Holy place. I’ve really enjoyed writing for you, and for me. Good night, and see you back in the states tomorrow! Xoxo